This week I’ve launched my first big plugin pack for Final Cut Pro X. Drop Alex4D Animation Transitions onto titles, images, videos and generators to animate them on or off the screen. Instead of a logo or text just appearing, it can slide, spin, scale or skid on. You can also animate clips off screen.

To find out more – including demo videos and a 32 page manual – please visit http://alex4d.com/animationtransitions

Flashback is a Final Cut Pro X version of a plugin I made for Final Cut Pro 6 in 2009. Although Final Cut has a built in ‘Flashback’ transition, this one is much more like the Scooby-Doo transition as referred to in Wayne’s World.

END_OF_DOCUMENT_TOKEN_TO_BE_REPLACED

Last week an editor emailed me with a request:

could you build a generator that would give me both a timecode burn in and a footage and frames counter?

I’m looking for one for a movie I’m working on, it’s the first FCPx studio picture and I’m trying to help out our sound guys. the timecode start should be user definable feet and frames should be like 35mm 4 perf  (16 frames per foot)

Building timecode plugins in Apple Motion 5 for Final Cut Pro X isn’t straightforward – partially because Motion is designed to build effects, titles and generators that work at any frame rate. The Final Cut Pro X built-in timecode tools are buggy, so I’ve been trying to make a fixed Timecode generator for a while. This request gave me the impetus to find a new approach to the problem.

Alex4D Timecode 35mm 4-perf is the result. If you are collaborating with people who want to see timecode in feet and frames, download this effect.

END_OF_DOCUMENT_TOKEN_TO_BE_REPLACED

This title chooses a random order to move lines of text from off the edge of the screen to the other at randomly chosen speeds.

Although you can choose how much the animation of each line overlaps – whether the text moves one line after another, or more at the same time – In my video I used two copies of Alex4D Random Move Horizontal on the timeline to animate twice as much text in the same time.

END_OF_DOCUMENT_TOKEN_TO_BE_REPLACED

Switch Channel was inspired by my ‘Bad TV a4d’ effect plugin. I liked how it made the image roll up or down. I thought it would be good if as it rolled, another clip could appear. I realised that this transition would simulate the display of old TVs from the 70s and 80s – especially those without remote controls. When you turned the knob or punched a button on the TV it would take a while to retune and  handle the information coming in from the new channel.

This transition works well when you want to change the subject, or when you want the next shot to interrupt the current shot – or for a momentary aside. If you want to simulate switching through many channels, add the shots to your timeline and apply the Alex4D Switch Channel transition between them. Select all the transitions and type Control-D and enter a low number such as 5 or 6.

If you want a temporary interruption – such as a comment from an interloper – use pairs of Switch Channel. With each pair choose different Roll directions for the first and the second: for example roll up to start the interruption, and roll down when you return to the main story.

END_OF_DOCUMENT_TOKEN_TO_BE_REPLACED 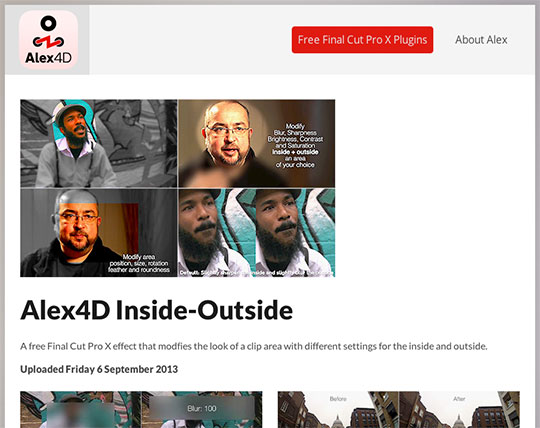 Inside-Outside is based on an effect I created for myself when I shot some interview footage too soft and didn’t want to oversharpen it. The prototype version slightly sharpened the interviewee’s face and slightly blurred everything else. This made their face look clearer than when I oversharpened it – and it hid my mistake.

It is especially useful for some DSLRs because their built-in sharpening isn’t very good, so camera people advise us to turn the sharpening off and sharpen with more control in the NLE.

Seeing as it sometimes helps to direct people’s view by brightening the subject and desaturating the surroundings, I added brightness, contrast and saturation controls to the inside and outside areas of the effect.

END_OF_DOCUMENT_TOKEN_TO_BE_REPLACED

Last week I posted a link to some FxPlug test movies showing 3D model manipulation in Motion 5. This week it looks like motionVFX have upgraded their planned mExtrude plugin to do much more than extrude 2D text and logos.

Run Final Cut on your camera?

The problem some filmmakers have with DSLR rigs is that they are very unwieldy.

Here’s the tale of building a camera that pays homage to the revolutionary portable 16mm cameras of the 60s and 70s by incorporating a surprising ingredient:
http://blackbettycameras.com/building-betty-2/

With a subscription to Parallels Access, you can operate a copy of Final Cut Pro X on a remote Mac  using an iPad. Most reviewers say that it is better than previous remote access applications, but it is expensive – it is being sold as an $80 a year service instead of as a $25 iOS app.
http://www.youtube.com/watch?v=PFe3TxNUgYI

END_OF_DOCUMENT_TOKEN_TO_BE_REPLACED

Intelligent Assistance have launched a new tool: Producer’s Best Friend – which is secretly an editor’s best friend too.

It extracts lots of useful information from Final Cut Pro X projects and events. Timelines are stored in projects, content is stored in events.

Although Producer’s Best Friend can report on the majority of information manipulated by Final Cut Pro, it is limited to the information that can encoded in Final Cut’s XML format.

One of the features I’m looking forward to in 10.1 is an update the the XML format to include much more timeline information. That would support lots of interesting third-party applications: http://assistedediting.intelligentassistance.com/ProducersBestFriend/

Oliver Peters wrote a post reminding us that as well as pushing Apple to improve Final Cut Pro X, we shouldn’t forget the tools still available to us in Final Cut Studio.

We can still make advanced DVDs in DVD Studio Pro, fix many problems with Soundtrack Pro, do advanced colour grading in Color. We can even use Final Cut Pro 7 to save GB of disk space using its still more advanced media management tools. Every once in a while I like to have a little more control over my audio that X can provide, so I turn to Soundtrack Pro to sort things out – even now that Logic Pro X has arrived.

SceneKit is the part of Mac OSX that can be used to create, modify and display manipulate 3D models. Apple provides kits like these to make it easier for developers to add 3D animation to their Mac applications (this article shows some of what it can do – in iOS apps as well).

END_OF_DOCUMENT_TOKEN_TO_BE_REPLACED

Here are videos showing some of what they can do: