I’m a happy user of a Panasonic HVX200 and a Canon HV20, which are relatively affordable cameras for capturing images beyond standard definition. One of the biggest problems in shooting HD is focussing the shots. Most camera viewfinders are much too small to be of any use – let alone high-enough resolution to show the full image being recorded. My MacBook Pro may have a 1920 by 1200 display, but it will be a long while until that sort of display fits on a camera designed to be held with one hand. 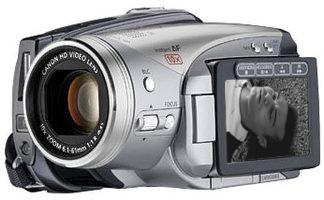 However, some cameras have a connector which might help: an HDMI connector. HDMI is a standard for transmitting uncompressed digital video. My £435 HV20 has one on the back:

If you add a Matrox MXO2, you could use a computer display help to focus your image.

The MXO2 is a box for sending HD video signals to computer monitors, but I think that the monitor can be the one built into your portable computer also. It comes with a Express/32 card for MacBook Pros as well as a PCI card for MacPros. It also has a built-in battery.

The downside is that using a MXO2 and MacBookPro isn’t very convenient or affordable for most people.

I’ve had a thought: what if you could use your mobile phone as a viewfinder? They have better screens than some small camcorders. You can use multitouch gestures to enlarge parts of the image you’re interested in.

The question is, what is the simplest way of connecting the iPhone to your camera? The first thought you might have would be to create a special camera to iPhone cable. The problem is that the connector on iPhones and iPods don’t allow for video input. An alternative is to make the image available to the iPhone using Bluetooth or WiFi. This means that this method will work with all iPhones and iPod Touches that can connect those ways.

The iPhone Bluetooth won’t work for this application because it doesn’t support OBEX, the standard for passing multimedia files between phones and other devices.

http via WiFi could work. That means you could use the web browser in your iPhone (or any Wi-Fi enabled device) to navigate to a specially generated page that will hold the picture generated by the camera. You would have all the image navigation technique you are used to in your browser to have a close look at the picture you’re taking.

So, I hope small device manufacturers are listening. Create a fingertip-sized device that plugs into the HDMI port of a HD camcorder. The HDMI protocol supplies 5V of power if needed. That could be used to power a chip that converts the pixels sent into the HDMI by the camera into an image. This image would be then broadcast to nearby WiFi devices as a picture using a mini webserver on the same chip. This custom-built chip could be added as a dongle to any connector that transmits an image that you want broadcast online. 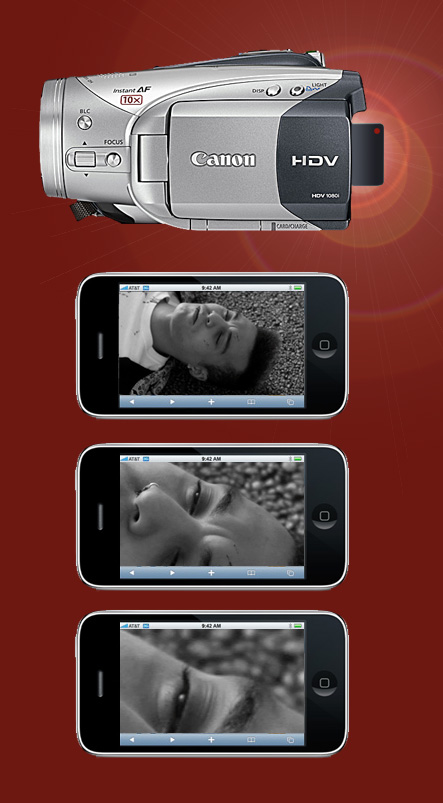 This is the relative size of a Canon HV20 and an iPhone.

So, if anyone wants to make such a thing, all I want is credit and a few samples of each one you produce!