When Steve Jobs launched the iPhone 4 in March 2010, one of the big new features was a much higher resolution screen. The iPhone 3GS 3.5″ screen displayed 320 by 480 pixels. The new phone displayed 640 by 960 pixels in the same space. The number of pixels displayed per inch increased from 163ppi to 326ppi.

Developers didn’t have to change the layouts of their applications to run on the new phone. Instead of displaying 320 by 480 apps at half the size on the 640 by 960 screen, the new version of iOS used twice the pixels horizontally and vertically to show the same content. Since then developers have designed their iPhone apps to work on 320 point wide screens even though the vast majority of users will see them on 640 pixel wide screens.

Apple marketed this new screen as a ‘Retina display’. Apple later said that the definition of a  Retina display is a screen where individual pixels cannot be distinguished at a normal viewing distance. In the case of the new phone, it would have to have a screen resolution of at least 300ppi when used at a distance of 10-12 inches. The combination of figures is summarised as ‘Pixels per Degree’ – the number of pixels per degree as seen from a specific distance. 300ppi at 10″ equates at a PPD of 53. The iPhone resolution of 326ppi at 10″ has a PPD of 57.

Minutes after the launch, Apple fans started speculating when other products would get a Retina display update. The top of the range iPod Touch followed in September 2010. The iPad got a Retina display in March 2012, followed soon after by Retina MacBook Pros in June 2012.

With every new launch event, may hope for a Retina display as part of the specifications for new Apple products. But what does Retina mean for iMacs and desktop displays?

Starting with Apple’s Retina definition of at a PPD of 53, if we increase the viewing distance for the display to 24″ (MacBook Pro viewing distances are assumed to be 20″), the resolution of a desktop Retina display should be at least 127ppi.

During the MacPro preview at this year’s Worldwide Developer Conference, Apple specifically mentioned that the new computer would be powerful enough to edit 4K footage using a future version  of Final Cut Pro X.

If a desktop Retina screen (whether in an iMac or in a standalone Thunderbolt display) was 4K, the most common definition of 4K would be a resolution is 3840 by 2160. If a 4K screen had a pixel density of 127ppi (the minimum to qualify as Retina given Apple’s rules), it would measure 34.8″ diagonally. This seems reasonable compared with the current top-of-the-range Apple displays which display 2560 by 1440 pixels at 109ppi on a 27″ screen.

If you wanted to display 4K on a 27″ screen, the pixel density would need to be 163ppi (by coincidence the same density as the original iPhone).

The catch with a 4K Retina display is that if the native resolution of the screen is 3840 pixels wide, then Mac OS and Mac Apps will see a display that is half that resolution in points wide: 1920 points. That this, the ‘Best for built-in display’ UI dimensions would be 1920 by 1080. 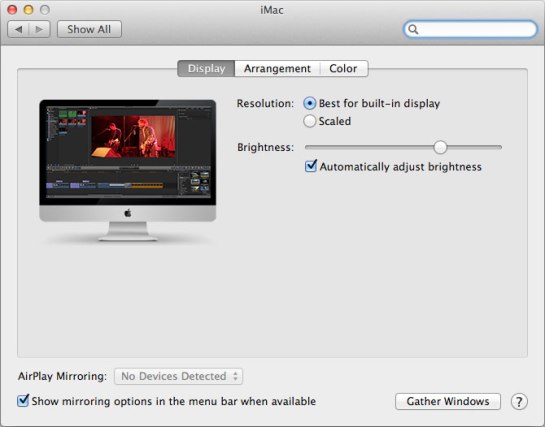 Showing OS X and Mac apps at HD size on a 27″ screen would make the menus, buttons, controls and app content look too big for everyday use. Given the extra cost of a Retina display, it would be a pity to be able to show so little on screen at a time.

In practice most people would use such a display at a simulated resolution of 2880 by 1620 (which uses 1.5 pixels by 1.5 pixels to show a single square UI point). That would show UI controls and app content only slightly smaller than the on the current 27″ displays. The way current way Retina works in the GPU in this case is to draw content to an imaginary 5760 by 2340 screen and scale in down to 50% on the native 4K screen. A lot of GPU power being spent on a less than optimal combination of native resolution and UI display.

If the resolution of such a desktop display matched that of a 13″ MacBook Pro with Retina display at 227ppi, the screen would measure 38.8″ diagonally. In order get the same graphics speed on a 4K/8K display as there is on today’s 17″ iMac or Thunderbolt display would need a graphics card that is 9 times more powerful (there are 9 times as many pixels on a 7680 by 4320 display vs. a 2560 by 1440 display).

I think that it is a waste of GPU power to double the effective resolution of large desktop displays.

Retina without double the resolution?

It makes more sense to have a 4K display at half the ppi of a MacBook 15″ with Retina Display. 3840 by 2160 pixels at 109ppi results in a screen measuring 40.4″ diagonally. The same ppi as the current 27″ iMac and Thunderbolt displays.

It is very easy to make a 109ppi 40.4″ display a Retina display – move it further back until you cannot see individual pixels.

If the Retina threshold is the equivalent of 300ppi at 10″, the new 40.4″ display would need be 27.75″ away from your eyes for individual pixels to be indistinguishable. My iMac 27″ is currently 25″ away from my eyes – at least three inches further away would be much more comfortable for a screen that would be so much bigger.

If Apple must introduce a Retina display for the desktop, I hope they don’t waste GPU power to double the effective resolution of a screen we’ll probably want to operate from further away than current screens.

What do you want from Apple’s desktop retina displays?