The ‘method’ (patent parlance) they use as a example in the abstract is shows an editor sending media clips to collaborator A and having a window-based chat session about prospective changes. Collaborator A then goes on to share the task with a new collaborator, B, who gets the footage and who can appear in the chat window of the original editor.

Here’s the picture FCP.co used to illustrate the news:

They pointed out a possible code name for a collaborative media application is included in Apple’s mockup: ‘Light Table.’ In this case the role of the user on the project is ‘Assistant Director,’ the tasks listed are Storyboarding, Acquisition, Organising, Placing Media, Effects, Collaboration and Delivery. 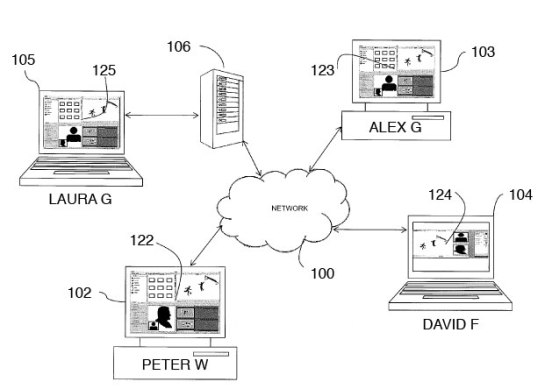 This illustration shows that Laura G is the editor with all the media content. The patent also mentions an example when a collaborator might not have the full application on their device (the user interface for David F is different):

So, David F can use a chat interface with window panes that show media clips plus before and after versions of an edit.

This seems like iChat with some extra windows for clips and playback, but the patent also covers non-real-time collaboration:

This means providing a way of dealing with edit conflicts:

The patent also deals with the reality of distributing large amounts of media over relatively slow connections:

Notice that the collaborating software itself can retrieve other data indicative of the media content at a later time. For example, a thumbnail image of some footage could be replaced by a low-resolution video clip, followed by higher resolution versions if need be.

The patent was applied for in July 2008 and assigned on July 17, 2012, so what is the relevance to Final Cut Pro X and the future of editing?

If Apple wanted to produce an application that implemented some of these ideas, Final Cut Pro 7 wouldn’t be a good place to start. Like the majority of editing applications, its internal structure and user interface metaphors were designed in the 1990s. They would have to start from scratch when it came to internal structure and user interface metaphors.

As regards internal structure, editing projects would have to be stored in a multi-user database such that different parts could be edited at the same time by different collaborators. The user interface would have to allow for multiple versions of the same series of clips to exist on the same timeline.

It seems to me that Final Cut Pro X was specified based on the ideas in this patent. This meant writing everything from the ground up: reimplementing all of Final Cut Pro 7’s features while adding features relevant to this new way of collaborating.

Final Cut has always been around to sell Macs. This patent points to the possibility that a future version of Final Cut Pro X could be the core of  new platform: professional media collaboration using a variety of Apple hardware. Ranging from iOS devices to MacBook Pros up to the product that Tim Cook has said will make ‘professionals very happy’ later next year. If industry analysts are looking a role for high-performance hardware in a post-PC world, this could be it.

In practice implementing these Methods, systems, and apparatus for collaborative media editing will take a few years. One of the major tasks involved is prioritising feature implementation. In practice, Apple adds features to new platforms in an order that suits long-term success – even if that order makes little sense to external observers at the time (I recently compared the history of Final Cut Pro X releases with that of iOS and MacOS X).

If Apple isn’t moving in this direction, at least this patent is an interesting insight into what might have been.

In my next post I will suggest why Apple abandoned the track-based editing metaphor that the majority of the post-production industry have relied on for over 20 years.