Included with Motion 5 is an effect that extrudes a clip so that it has a 3-D treatment. Alex4D Extrude makes this effect available in Final Cut Pro X.

Here are the controls:

As Extrude can only draw in the transparent parts of a clip, if the footage fills the clip, you must first apply an effect that adds areas of transparency. In the example above, I added my Alex4D Curve Scale effect that scaled down the clip to 80% of its original size around a control point, adding an area of transparency around the footage: 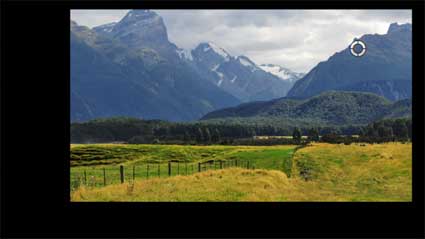 Alex4D Extrude takes the output of the scaled clip and simulates the effect of many copies of the clip are stacked on top of each other, with the back copy being offset by a distance and angle. You can enter numbers for Extrude Angle and Extrude Distance directly, or drag the on-screen control to set the values:

In the following example, the values have been changed and the size of the back of the extrusion has been reduced: 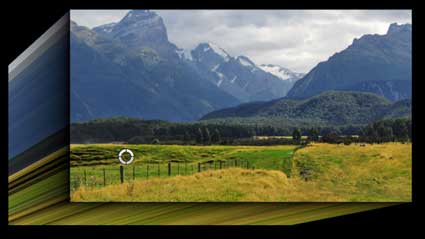 Instead of the extrusion being made up of copies of the clip, you can use a colour gradient instead.

In this case, the Back Size has been increased to 1.21:

As well as using an effect to scale down the source clip, you can apply a mask. In the following example, I applied my Alex4D Mask+16 effect first: 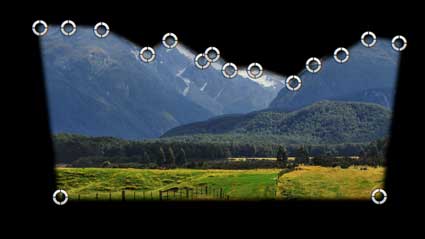 I then applied the Alex4D Extrude effect: 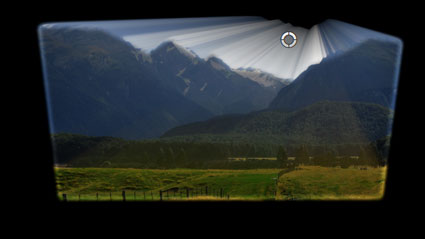 In this case I reduced the brightness of the source clip by reducing the value for Face Brightness to 0.23, and reduced the Back Size to 0.25:

The effect can also be applied to titles: 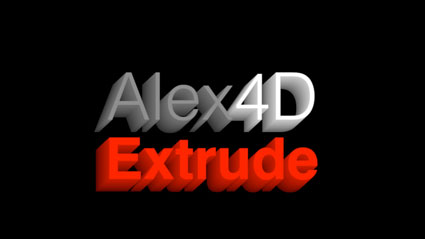 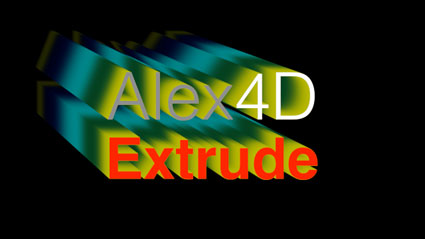 The gradient can be made of many colours: 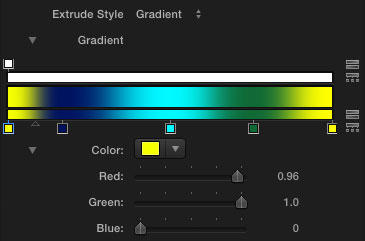 To add new colours to the gradient, double-click the lower coloured bar and change the values for Red, Green and Blue, or edit the colour by clicking the colour chip. As before the value of Extrusion Back has reduced the brightness of the back of the gradient.

The value of Clip controls how much of the extrusion is drawn. Values below 0 show the stack not reaching the source footage: 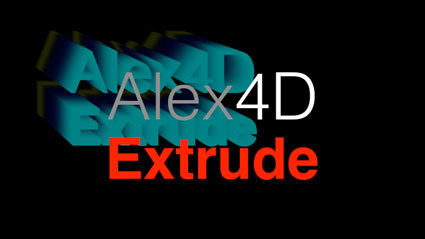 Values above 0 reduce how much of the extrusion is shown leading back from the source footage: 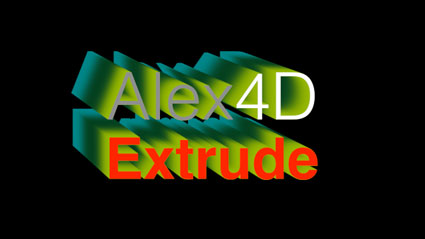 In the case of Extrude Style: Shaded…

…values less than 0 don’t draw the source clip in front of the extrusion: 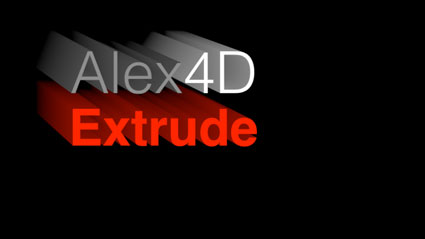 …the extrusion to the top left of the frame doesn’t look correct:

However, if you change Extrude Angle, the effect is a simple way to simulate 3D text:

As well as having smooth colour transitions in gradients, you can force the gradient to stay the same between colour chips:

In this case the white colour chip is selected, and Interpolation for that colour is set to Constant. If it wasn’t, the gradient would gradually change from white to green. Here’s the result of applying that gradient to the extrusion:

You can also edit the gradient so parts are transparent. Add opacity chips by double-clicking the top bar in the gradient, where white is 100% opacity and black is 0% opacity. You can also set the Interpolation for each opacity clip. This gradient has a gradual change in opacity between the first and second chips. The second chip is black and selected, which means the gradient will be transparent from that point on. As the Interpolation is Constant, the opacity will be 0% until the next chip. 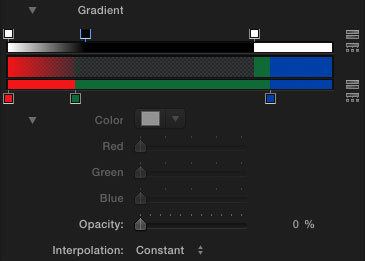 Here’s what the extrusion looks like using this gradient: 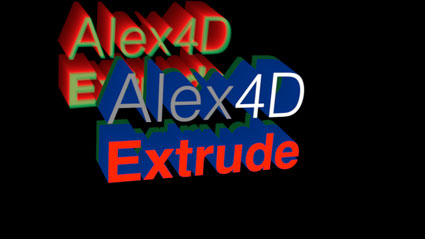 It includes an installation script for Spherico’s Motion Template Tool application, if you don’t have it on your Mac, download it. It is a freeware/donationware tool that simplifies effects installation for Final Cut Pro X users. MTT installs effects for Final Cut Pro X in the correct folders, creating them if need be. You don’t need to have Motion 5 or MTT installed for these effects to work.

Once you have MTT installed on your computer, double-click the ‘Install Alex4D Extrude 1.0.mtt’ file.

If you don’t want to use MTT, install these effects in Home / Movies / Motion Templates / Effects / Alex4D: