This is the third in a series of posts about what’s hidden inside Final Cut Pro 10.0.

Inside FCP X there hints of features that have yet to be fully implemented, or have been dropped and never to be made available. There’s no way of knowing which is which, but it’s interesting to get inside and have a look around.

Ever since the case of the first ever Macintosh in 1984 not having any text to describe connectors, Apple have tried to enable internationalisation of hardware and software a priority. That means that most Macintosh applications contain text in multiple foreign languages. This makes software simpler to distribute, but also easier for us to examine.

In bygone days we would have used ResEdit to take a look at application text, dialog boxes and menus. As MacOS X is based on Unix, applications are now stored as specialised directories which can be explored without needing a specialised tool.

More preference panels than we know how to display:

So there is a debug mode for Final Cut Pro X.

Maybe there’ll be a way of viewing audio as numbered channels:

I don’t know how to make this menu option appear:

It seems that the way timelines work in version 10.0 wasn’t always the plan. Here’s a different icon (from Final Cut Pro / Contents / Resources / Sequence.icns) for timelines:

There’s a chance that there’ll be AppleScript-based automation in a future version of FCP X:

In MacOS X Lion, AppleScript apps have access to all the operating system class libraries. Third parties might be able to do interesting things with AppleScript access to Final Cut Pro X data using specialised commands in an AppleScript menu within the application.

We know from Apple’s Final Cut Pro X FAQ that XML workflows will be supported. There references here too. In a file that describes the XML import function (Final Cut Pro/ Contents / Frameworks / Flexo.framework / Versions / A / Resources / en.lproj / FFXMLImport.nib), there’s the option to import media and Final Cut Pro Classic markers and effects:

In the XML export function (Final Cut Pro / Contents / Frameworks / Flexo.framework / Versions / A / Resources / en.lproj / FFXMLExport.nib) there is the option to export to Apple’s new XML flavour – axel, but no mention of legacy XML for current workflows (to Apple Color or Final Cut Pro Classic):

Final Cut Pro X’s price, UI and lack of a feature set to match FCP 7 have prompted many editors to discount X as an Apple attempt to attract a whole new market of prosumers. Many would define the ability for multiple editors to work on the same project as the definition of a Pro feature.

There is evidence of hidden multi-user editing features in Final Cut Pro 10.0. Apple have come up with the concept of ‘Guards’ – where editors can be assigned to work on specific sequences, tracks or story segments.

This means a sound editor could be working on audio tracks and an assistant on a story segment while an editor works on the main storyline.

Here’s what a dialog box would look like using that text:

There’s also evidence of an overlay that could be used to add to icons to allow for user administration within Final Cut. This is an icon that is from the part of FCP X that implements Motion 5-based effects (Final Cut Pro / Contents / Frameworks / Ozone.framework / Versions / A / Resources / OZLibraryBadgeIcon.icns), but it could be relevant:

Here’s what I thought a ‘guarded’ storyline might look like in a future version of Final Cut Pro X (from my old post on FCPX’s database underpinnings):

(To look inside Final Cut Pro X, select its icon in the Applications folder. Right- or control-click it and choose Show Package Contents from the contextual menu. TextEdit can open .strings files. Preview can open .icns files.) 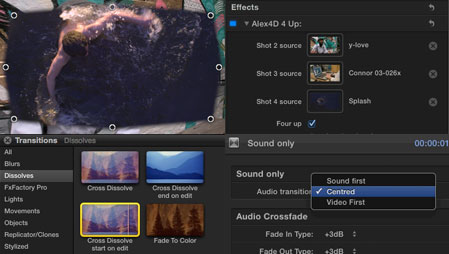