The product manager for Windows 7 recently demoed its multitouch features. The video is over at The Inquirer. 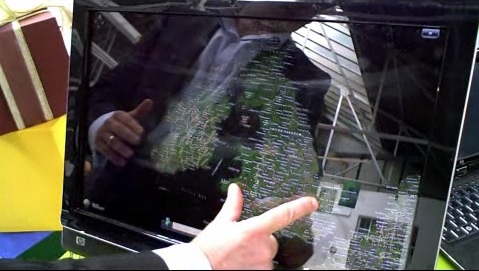 The most positive thing about having a quickly animated globe was that the demo showed that you select a small part of a large database of information very quickly. I’m not sure what the value of rotating that view was.

Corel added some large icons and a single twist feature in a photo album. The software didn’t seem to respond to any kind of gestures – the touch was simulating a mouse only. The page turn looked unnatural and inhuman. The photo twist could have been achieved using a mouse in conjunction with a modifier key.

There were no cues to show what features responded to multitouch, and the content didn’t seem very directly manipulatable.

It would have been much more interesting if the demo had shown that you can use both hands to grab lots of pictures at a time and drag them to your album. Why drag one by one if you have a multi-touch screen? It is likely that Corel doesn’t have the engineering skills or resources to make this happen yet.

The most telling aspect was that this product manager sounded like he was walking on a tightrope – staying very close to the demo line and worried that at any moment he would fall off. To switch metaphors, it sounded as if he was worried that a kid would pipe up that the Emperor has no clothes.

This sort of demo makes it seem that Microsoft would rather some other software company shows them the way, so they can implement a version that is good enough for the majority. The history of computing so far shows that it is better to wait for others to innovate for the 20% thought leaders, so you can implement for the other 80%.

After seeing that video, you might get the idea that Microsoft have no chance, and they need to wait for Apple to come along and show them how it’s done so they can rip it off and sell it in Windows 7.X. It turns out that Microsoft have been doing interesting research on the subject and have been coming up with some useful principles.

Here is a better video featuring Microsoft Surface’s manager talking at a Microsoft developer event back in March about how to design software for multitouch and Natural User Interfaces:

He says why Office doesn’t run multi-touch, why tapping the screen isn’t the same as touching the screen, how form factor is a big problem, the danger of ‘ghost contacts’ and how Wacom came up with a key ergonomic improvement. Fun fact: Microsoft’s Surface product can detect 52 different touches at the same time. Amongst the highlights, he outlines five design principles and contrasts them with older systems:

You use Command Line Interfaces to manipulate text.
They are based on recall, you must direct them, there are many paths through the system to get to the many very specific commands you might want to use, your keyboard commands are words that perform operations on disconnected data, they are static.

You use Graphical User Interfaces to manipulate graphics
They are based on recognition, you can explore them, there are fewer routes you need to take and you have different ways to getting the system to do what you want, you control a mouse that acts as your agent to manipulate graphics, they are responsive.

You use Natural User Interfaces to manipulate objects.
They should be based on intuition, the correct tools are made available for each context, fewer methods to quickly achieve what you want to get done, you directly manipulate, they are evocative.

Check out the video, it’ll give you a much better idea of what multitouch away from iPhones might be like.