In which I use the social media element of a UK advertising campaign to demonstrate how clients and agencies will need to learn how to trust unsupervised copyrighters with their brands.

To anyone who’s ever been in interminable edits with a directors, copy writers, art directors, agency people and people from the client, you might not believe the following: with social media, you’ll have to find writers that you can trust.

Given the small number of words and images used in any given TV ad campaign, that doesn’t stop the script being endlessly taken apart an criticised by everyone involved. Given that eventually most campaigns will need to have a social media element, imagine how many more words and images will need to be created and distributed… and approved by someone.

This sort of micro-managing won’t work for social media.

A month ago, a campaign started to promote a car insurance price comparison site called ‘comparethemarket.com’ – it features a meerkat character who wants the audience to understand the difference between that site and the site he runs: ‘comparethemeerkat.com’:

An ad I don’t mind seeing when it comes up on TV, but didn’t feel the need to find out more.

Over 65,000 people have seen this picture. A few hours later ‘aleksandr_orlov’ posted this on twitpic: 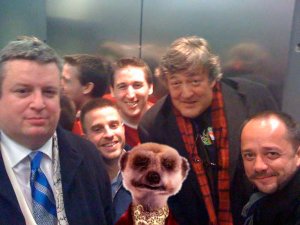 Over 3,000 people went to TwitPic to see this image. A day later I wanted to catch up with what Stephen Fry had been doing since – I thought that his getting stuck in a lift would be one of the random events that gets Twitter that bit closer to the mainstream.

Stephen Fry is considered a national treasure in the UK, he is becoming one of the first people British people follow when they sign up with Twitter. That means that some of Stephen’s updates don’t make as much sense as others – they are replies to messages from followers. You need to see the message he’s responding to.

In this case Stephen had posted this update: ‘@alboreto I thought there was someone else in there…..’ – on Tweetree I saw that @alboreto was retweeting the post from @aleksandr_orlov – I didn’t recognise the name or the new character pasted into the lift picture.

I then checked out @aleksandr_orlov’s Twitter profile. Here are some of his recent updates:

Aleksandr_Orlov is a puppet character from the Compare The Market insurance comparison website UK TV campaign. He has almost 2,000 Twitter followers and almost 200 updates in the last month. Interesting how most of the posts are responses to messages from other Twitter users. All his updates are consistent with the way he is portrayed in the advert. His bio explains his Russian accent and links to his Compare The Meerkat website.

If you want to see social media copy writing in action, visit his profile on Twitter. You’ll see how each answer is tailored to each question from other Twitter users: 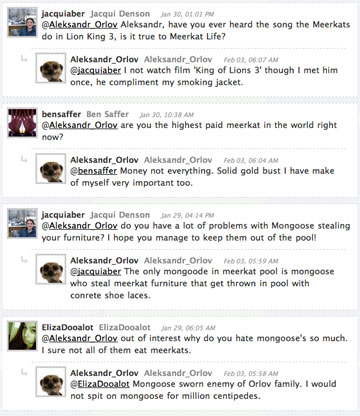 All my friends,
I have made new TV advertisement!
It seem some people still visit my site looking for car insurance deal. So this time I have make absolute clear difference. Only mongoose could not understand.
Please enjoy sneaky preview at http://www.comparethemeerkat.com/tv-ad.html

This note got some comments playing along: 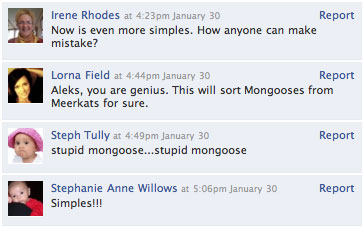 On Friday, I am travel to Miami, USA to see artist Celine Dion perform in ‘Taking Charge World Tour’! This will be 6th time I have seen Ms Dion live perform greatest movie song of all time ‘my heart will go on’. Magical. I will put up story of my trip when I return. I am excite!
Please do not be to much jealous

His channel on YouTube is quieter, but he still makes friends with YouTube users and has extra information about his character:

This sort of quick response to members of the public from the personification of a brand requires that the client trust the ad agency and the ad agency trust the copy writer(s). If someone makes a mistake they can delete a tweet, but they cannot edit it. Deleted tweets look suspicious too. The writer needs to maintain a consistent character 24 hours a day, using the principles of standup comedy and improvisation to respond to other users of Twitter, YouTube and MySpace etc.

The only caveat is that although a campaign may be entertaining for audiences and useful for the CVs of the people involved, the proof of the pudding is in the eating. This will only be a positive case study for the future of advertising if it improves the fortunes of Compare the Market.com – we’ll see.