George Blackstone and I made The Things We Do for Love, a documentary on dating and relationships. It is made up of interviews with many people of all ages. A recent task I had was to make a DVD so that the contributors who couldn’t reach a screening would have a chance to see the film. I also planned to put alternative edits and bonus footage on the disc.

As I was putting it together, I realised that it might be better to make all the content I was generating available online. That is the modern way. So instead of building my menu system, I’m uploading the files to Vimeo.

Vimeo is a site where all the content is generated by the people who post it. As well as standard definition video, they host HD (be in 720p24, 720p25 or 720p30). They have an upload quota of 500MB a week. The great thing about this quota is that it encourages you to use it. Those camera tests and technology demos can now be hosted on a free site with minimal advertising.

Videos and pictures that you upload can be grouped into albums, where content on a specific theme can be gathered together. I’ve grouped the videos associated with our documentary in an album called The Things We Do for Love:

In the coming days I’ll upload more bonus footage. The videos are smaller than SD for now because Vimeo sees 1024 by 576 PAL widescreen videos as being less than 1280 by 720 HD, so encodes them at a smaller size (for now). We shot at SD and I couldn’t fit a scaled up HD version into my weekly 500MB quota.

Another feature of Vimeo is ‘Channels’ – this is where users curate a channel of videos on a chosen subject. As well as their own videos, they can choose to include other people’s videos. This feature is more about community building – people can post messages that appear on the home page of the channel, and there is an option to include a forum for people to discuss the content of the channel – or anything else they fancy.

Mine is called ‘Our London‘ – it’s a collection of videos featuring London. 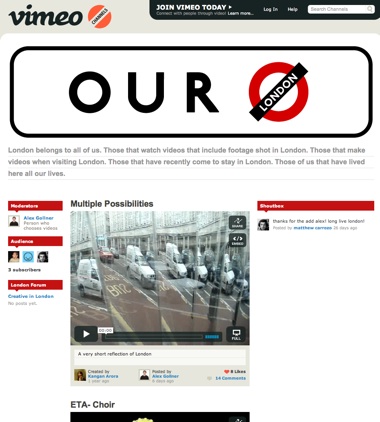 I imagine many companies are trying to create the ‘Super YouTube’ – this one will do for me for now.