Here’s a new design for a future London tube map.

As accessibility information must be included on the map (for political reasons), I’ve come up with light blue markers for interchanges and station ticks. This means that the disability logos no longer overpower the map.

Many think it would be useful to show distances between stations that are physically close but are not connected directly. The new official map is starting to to this, my solution is different. I’ve also shown more links than the current map does.

I’ve found a reason for Beck’s inclusion of the Thames on map – river services are now included on the map – not a serious suggestion.

I’ve also shown the proposed service changes for the Circle and Northern lines. I’ve called the new separated service “Edgington” in the tradition of the Bakerloo. Maybe “Kennware” would be an easier name for tourists to pronounce. 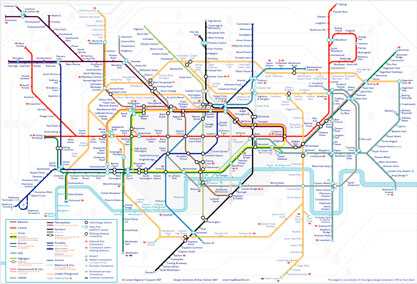