In April 2011 Apple surprised the world of post production when they showed a sneak peek of Final Cut Pro X at the NAB Supermeet. It was obvious that the next version of Final Cut Pro after version 7 was going to be a completely rewritten application – thowing out all previous code and many of the concepts that had worked well for Apple over the previous 12 years.

When Final Cut Pro X was launched in June 2011, there were many shocks in store which included an inability to open previous projects, no tracks, many missing features, strange colour correction tools, no ‘source monitor’ and hardly any connectivity with other post apps. After looking at screenshots – which seemed to show much less complexity in the UI, much less congurability and clips that looked like friendly rounded corner tiles – many people dubbed Final Cut Pro X as iMovie Pro.

Although Final Cut was launched with updates for Motion and Compressor, many pros were left in limbo when it came to how to interpret what this change in direction meant.

Was Apple still interested in people using their software to produce broadcast TV and feature films? Had they conceded that market to Avid and Adobe? Did it show that Apple was going to be happy with prosumers. The huge market of talented people with small businesses who sometime might need a very easy to use but capable video editing software, but not for those that support themselves primarily by editing videos, TV shows and feature films.

As 2011 went on, there were few clues from Apple. However much Apple used the word ‘professional’ when promoting Final Cut Pro X, there were many that were unconvinced. How could ‘professionals’ consider an application that doesn’t fit into established workflows? Apple never properly explained the problem they seemed to have with track-based editing.

Eventually Apple broke with convention and previewed some of the features that they were planning in the next major update. The implementation of Multicam turned out to be more powerful and simpler to use than any other editing app. The source viewer wasn’t as full featured as many would like, and the updated XML import and export was a disappointment to many third-party developers.

The rate at which Final Cut has been updated has reduced in 2013, but the fact that they previewed a new Mac Pro in May gave some people hope that Apple were still interested in making hardware for ‘professionals.’

The launch of Final Cut Pro X also worried the users of Apple’s professional music app: Logic Pro. Many thought that if Apple followed the ‘Final Cut’ strategy with Logic, they would end up with Garageband Pro X: an dumbed down app for prosumers – which would make life easier for people who only need to work on music very once in a while.

An alternative possibility was that Apple would let Logic Pro wither and die – the last major version of the app appeared in July 2009. Was Apple happy with people buying old MacPros, putting them in studio racks and using four year old software?

Last weeks’ Logic Pro update provides us with some  clues about the future of Final Cut Pro. Remember that although features appearing in Logic Pro X may show that Apple aren’t against them in principle, the same features may never appear in Final Cut Pro X.

1. The Final Cut Pro UI is for professionals

Given that the early reviews of Logic Pro X  say that the user interface may have been redesigned, but it still gives users access to all the power that was available in version 9.1.X and more – while being easier to use. Video editors and motion graphics designers will find Logic easier to use.

This clue tells us that as well as supporting prosumers, the ‘Pro X’ apps are designed to be easier to use by post professionals who don’t spend all their time editing video (Final Cut) or making music (Logic). Perhaps Apple doesn’t believe in making apps hard to use so that only established pros in a discipline will want to use them.

However Apple still needs to show how not having track-based video editing provides so many advantages that it makes sense for editors who have trained how to edit over the last 25 years to learn a new editing metaphor (I wrote a post on this last year: Final Cut Pro X: Apple’s bet against track-based editing)

Also it seems that Apple isn’t against user interface elements that look like real-world devices.

The manual defines Logic Pro as a powerful, full-featured music application with all the tools you need to create professional-quality music productions.

The PDF version of the Logic Pro X manual has 919 pages. There are only 8 pages on using video within the application.

However there are a couple of interesting video features in Logic that might be useful in Final Cut Pro X. Logic has movie scene detection: once you import a movie into your project you can get Logic to analyse it and add markers where it detects scene changes. Here’s the movie before the command:

You can see that Logic marked scenes for the ape throwing the bone, the bone falling, and the weapons platform floating in space:

Logic then lines up the thumbnails to match the scene markers.

Over the last two years, Apple have been relying on third parties to help Final Cut Pro X work in established workflows:

Not ready for prime time

It is more like a statement of intent – it is currently the kind of workflow connection Final Cut Pro Classic used to have with Color for colour grading.

As long as you know how to prepare your timeline for the kind of export Logic X can handle, you’ll be OK.

Perhaps proper round-tripping will appear in conjunction with a future Final Cut update. The Logic Pro UI already refers to a feature not yet available in Final Cut Pro: 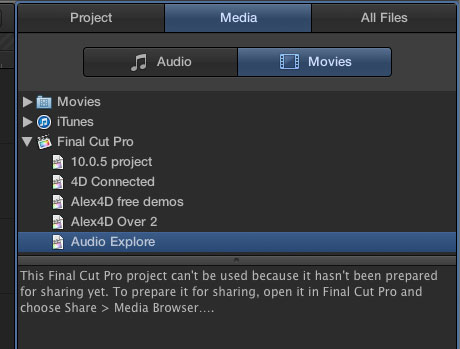 UPDATE: Take a look at the comment from Michael Garber explaining how to prepare Final Cut Pro X projects so they can be shared via the media browser. 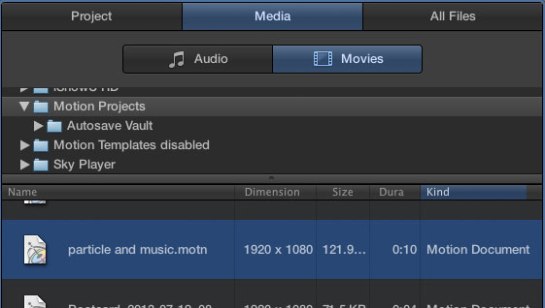 They can’t be imported into Logic projects, and Motion application isn’t mentioned in the documentation yet.

4. No upgrade prices for Pro Apps

Over the last few years developers have complained that although the Mac App Store may be great for distribution, they would like to provide upgrades at a reduced price for existing customers. Some commentators thought that once Apple introduced a big update to a Pro application, Apple would also introduce a mechanism for not charging current users the full price for the upgrade.

That means major updates to Mac apps must be worth as much to current users as the whole app is to new users. Maybe one day updates will be available as in-app purchases.

Final Cut Pro X has the least configurable UI of any pro application. There is a single main window with very few palettes. Within the main window you cannot reposition the browsers, the inspector, the timeline or the viewers. You can choose to have a couple of elements fill a secondary monitor.

– Has many different windows that can be arranged in any way 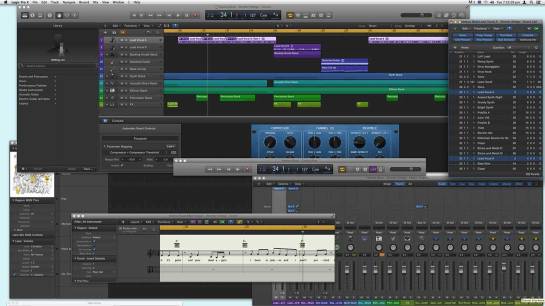 – Can store window arrangements in ‘Screensets’ – which are associated with individual projects and imported from other projects. Each project can store up to 99 screensets. Final Cut Pro X doesn’t yet have any keyboard shortcuts for the number keys. In Logic these keys are used to switch window arrangements.

– Allows you to configure the icons, controls and time display of window headers.

In Final Cut Pro, content and timelines must be stored in locations managed by the app. All users have control over is which drive information is stored on.

– you can choose whether to include source clips inside the project

– projects can be kept anywhere

– you can choose to copy selected settings, tracks and clips from another project

– you can choose to save the current state of a project as an ‘Alternative’ within the project and then switch between alternatives:

– When reverting you can choose which previous version of the project (each which store individual alternatives), whether saved explicitly using the Save command or from an Autosave.

– A floating palette that shows current time, which can be scaled to any size by dragging a corner

– Copy all keyboard shortcuts to the clipboard 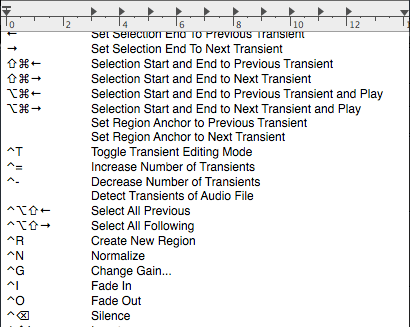 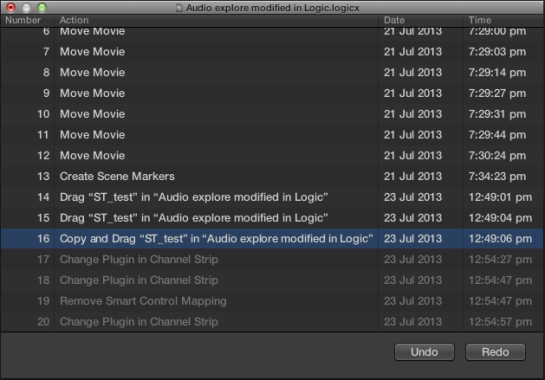 – Undo a specific action out of sequence (after the following warning)

– Each track can be set to have its own height

– Each track can be coloured with a choice of 72 colours

– Each clip can be coloured with a choice of 72 colours

– Multiple tracks can be combined in ‘Track Stacks’ which work a little like Groups in Apple Motion 5. In this case, all the acoustic drum tracks are combined in a single named stack: 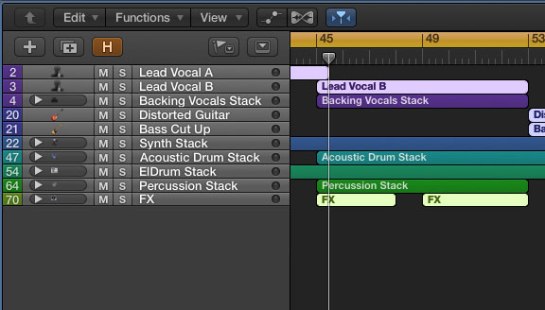 …which can be expanded to see the component tracks: 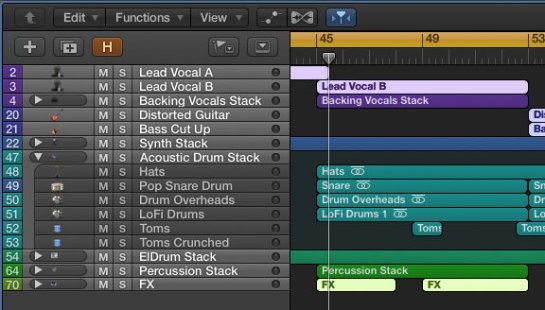 Perhaps clips assigned a specific role in Final Cut Pro X will one day appear in clips on separate tracks within a track stack with the same name as the role.

– ‘Smart Controls’ can combine multiple plugin controls into a single Smart Controls panel. You can even have a single control modify multiple effect parameters at the same time. This is a simpler version of the way Motion 5 can create combined effects based on multiple filters, generators and behaviours for plugins to be used in Final Cut Pro X.

In this case some of the many parameters of two of the plugins applied to a track are available in this Smart Controls display. There’s space to add more parameters and give a name to the third section. There are many more possible looks for the smart controls display:

This way of reducing the number of parameter controls that are visible would be useful in Final Cut Pro X when there are many effects applied to a clip.

– Windows can be optionally set to scroll horizontally while the project plays, following the playhead – this is called ‘catching’ the playhead

Who knows how much cross-fertilisation there is between the Logic Pro and Final Cut Pro teams. They are in the same organisational group. Logic’s antecedent was the best music notation application for the Atari ST over 25 years ago. Final Cut Pro was completely rewritten over the last five years (at least).

At least with the launch of Logic Pro X, professionals have further insights into what Apple’s ProApps group consider is an application for professionals.

Since the launch of Final Cut Pro X, the world of video editing applications has changed a great deal. Adobe seem intent in turning Premiere Pro into the missing Final Cut Pro 8 that many expected plus some Avid features alongside tighter integration with other apps. Autodesk have stooped down to the pro market by adding editing features to Smoke, while crazy Blackmagic plan to head them off at the pass by adding editing features to DaVinci Resolve, their free colour correction.

The next major version of Final Cut Pro X is sure to tell us a lot more about what kind of software Apple thinks professionals need (even if it might not be what pros say they want).