Where does PixelConduit come when comparing the various methods for making Final Cut Pro plug-ins?

The post powerful Final Cut Pro effects are FxPlugs: implemented in Objective-C, using the same kinds of tools that make OS X and iOS apps. This is the hardest method.

Although fans of QC say you can get great results without any programming, Quartz Composer is hard to learn and use. Even though it is a matter of connecting nodes, the nature of some operations requires combining many little nodes to get straightforward results.

FxFactory can also be used to distribute plug-ins made in Motion with the advantage of enabling trial versions that can be unlocked simply and templates that can’t be opened in Motion. These days, the majority of FxFactory-distributed plug-ins are made in Motion.

Useful effects made in Motion can get complex too. You might need many layers, groups and controls to provide a simple tool for Final Cut Pro editors. If ranked in difficulty in learning, PixelConduit fits between Motion and Quartz Composer for most people.

However, if you can’t get the hang of Motion, you don’t need to know much about it to implement a Conduit Effects System-based effect. It’s a matter of how you think. Many compositors prefer a node-based user interface over Motion’s ‘link anything to anything’ interface.

What can PixelConduit bring to Final Cut Pro effects?

If the Conduit Effect System becomes popular with people who make plug-ins for Final Cut Pro, what new features might we see in effects, transitions and titles released in the coming months?

As Conduit files are made up connected nodes, it’s a matter of what specific nodes can do that isn’t yet possible in Motion.

The most obvious advantage of Conduit in Final Cut is that some of its nodes output a larger range of colours.

Here are some comparisons.

First the source clip – with out of range RGB values:

The RGB values are clipped when the Brightness/Contrast effect as applied with settings that shouldn’t change the RGB waveforms:

When a Conduit Effects System-based colour correction effect is applied with settings that shouldn’t modify the waveforms, the waveforms are only slightly clipped. 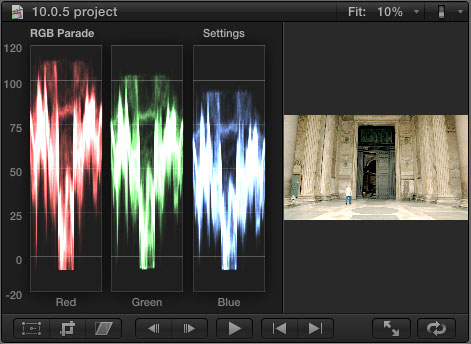 When Broadcast Safe is applied using the ‘Reduce Luminance’ method, the excess values are clipped:

If I apply a Conduit Effects System-based effect that can scale colour values to change the darker values so the darkest value is 0, the waveforms change correctly:

Added to the previous effect is a Conduit Effects System-based effect which applies a Knee to scale the upper parts of the waveform so the highest values are less than 1:

If you’d like to try these effects, first download the frameworks and plug-ins from the PixelConduit site – use the Download for Final Cut Pro X and Motion 5 button. Once installed, install the Motion templates in this archive.

Here are the controls for the two included effects: 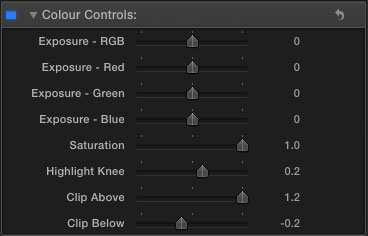 There are also more options for converting colour spaces. Here are some of the nodes which can be included in conduit files:

Using nodes like these, timeline clips could be converted to different colour spaces, have mathematical operations applied and converted back again.

As well as being able to include multiple video inputs (from different layers and drop zones in Motion), the Shapes node can be used to create shapes that are available to other nodes – primarily to mask video inputs: 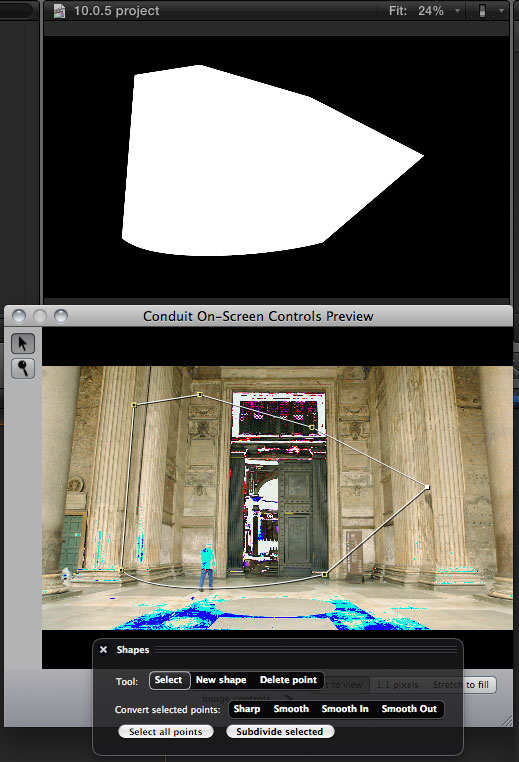 It would be useful if there was a publishable input button in the Conduit effect as applied in Motion. Effects designers could then add a ‘Edit Mask’ button to their effects, so editors could define and change shapes used in the effect – without seeing the rest of the Conduit Editor.

Motion’s mathematical calculations are limited to addition and multiplication (using Link parameter behaviours), there are more mathematical nodes available in the Conduit Editor:

Given the power of these nodes, it would be very usefui if the next version of PixelConduit had a Conduit Calculation generator for Motion. Such a generator could then export a value that could control parameters of other Motion layers using Link parameter behaviours.

As well as the nodes that can connect together to produce results, PixelConduit includes two scriptable nodes:

Supernode – scriptable: create your own nodes using the Javascript language. You can define a number of inputs and their types. Supernode tutorial.

There’s details on all the Conduit Effect System nodes available on the Lacquer website.

Is PixelConduit worth your time?

So, if tackling Quartz Composer compositions is too hard, and Motion is either too limited, or the model not right for you, it’s worth investigating PixelConduit.

The main worry is that the people working on the system might not be able to invest the time in fixing bugs in the parts of PixelConduit of interest to NLE effects designers. According to the blog at Lacquer, their income comes from delivering installations and supporting events using PixelConduit.

Perhaps it is up to interested parties to make it worth Lacquer’s while to support motion effects designers. Given that they are the best at making Conduit files, and know their system, if they sold effect plug-ins, it would be worth their while making the Conduit Effects System work well with new versions of Final Cut Pro, Motion, Photoshop and After Effects.

I would say it is worth a play, and once Apple fixes the current rendering fault in version 10.0.7 that afflicts many plug-ins, I hope we’ll see effects designers create interesting plug-ins using Motion and PixelConduit.