When learning Apple Motion I suggest that people avoid using keyframes to animate parameters. Motion is much happier using behaviours to change values over time.

This tip is for Motion users who have a good understanding of how to use behaviours to control animation.

The Curvature value of 100% means that the value eases out from 180 and eases into 0. Here’s the animation graph:

Unlike some behaviours you cannot directly set a curve shape using Ramp. In many cases you need to have a curve that eases in only or eases out only.

Using this tip, you get more control over the animation curve.

In this case I would like the curve to ease in to the value of 0 degrees. You can do this by using a negative Start Offset value.

Here’s what the parameter animation graph looks like using these parameters: 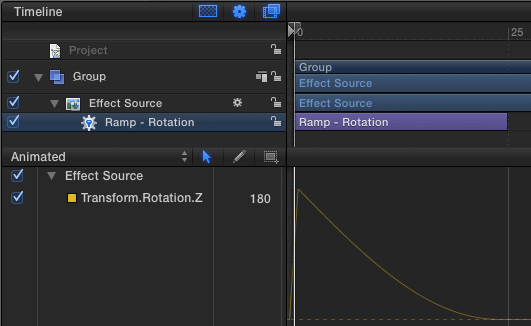 The curve is constant at the start when the value for rotation is 180 degrees, and eases into the end value of 0 degrees.

If little of this makes sense to you, check out the Motion 5 Fast Forward tutorial from Ripple training.