On the same day as the iPhone 5 announcement, Apple also launched new iPods. I found the pricing of the new iPod Touch interesting. If Apple is launching new smaller iPads next month, the pricing for the new iPods will have taken iPad pricing into account.

Here’s the current pricing line up for the iPod and iPad range as of September 12, 2012: 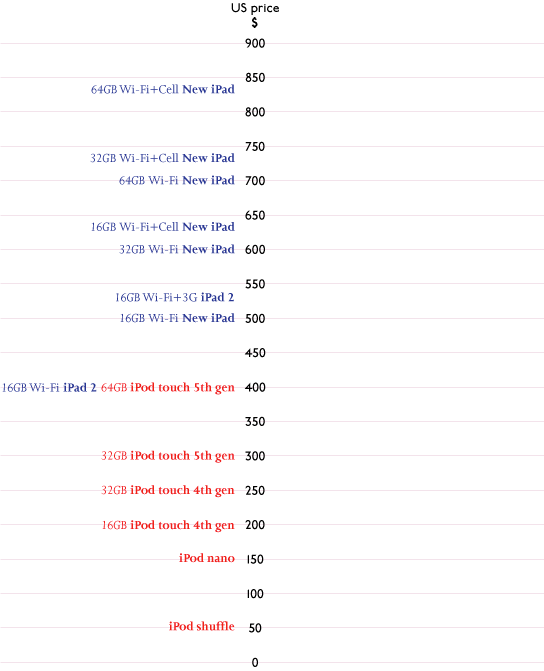 There are a two obvious price points left unoccupied.

The new smaller iPad is expected to be popular with younger people for use at home and at school, a similar market definition to the iPod touch.

So, where will the new iPads fit in? Will they have a 64GB variant? As the new iPhone 5 has enough space for a LTE radio, will there be a cellular version of the new iPad?

Although there isn’t a 16GB 5th generation iPod touch model, it is likely that Apple will want a gateway 16GB iPad ‘light’ model.

Although everyone is expecting the low-end iPad ‘light’ to cost as little as $250, that doesn’t seem to fit with the pricing of the iPod touches announced a couple of weeks ago.

Given that, here’s my guess as to where the new iPads might fit: 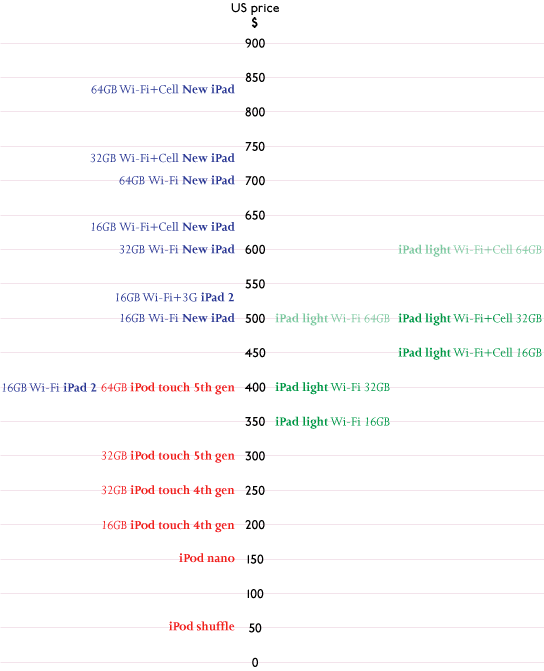 Although $500 seems high for a 32GB iPad light with LTE, it is unlikely that Apple will want to sell it for much less than a 16GB Wi-Fi New iPad.

It’s not as easy as it first seems to fit the new smaller iPads into Apple’s price list.

What do you think?