Final Cut Pro X can use clips with non-square pixel aspect ratios. However if QuickTime movies don’t have the correct flags set internally, there is no way to tell Final Cut that a clip’s pixels are anamorphic.

In Europe since the late 90s the majority of standard definition video has designed to be viewed on widescreen TVs. Instead of coming up with a new TV standard, a signal was added to broadcasts that told TVs to stretch the source 720 pixel-wide image from an old-style 4:3 image to a modern 16:9 widescreen image. This is the ‘anamorphic flag.’

Many QuickTime manipulation applications don’t set the anamorphic flag on clips, which means that Final Cut doesn’t show the clip in 16:9 widescreen – the clip displays as 4:3 so everything looks tall and thin. In Final Cut Pro 7 and earlier there was a quick way to define clips as having anamorphic pixels, that feature isn’t available in Final Cut Pro X yet.

There are two strategies to fix this: use an application to re-encode the clip that sets the anamorphic flag correctly, or use an app that can manipulate settings within clips without any re-encoding.

Apple Compressor and MPEG Streamclip can help with re-encoding the whole clip.

There are two applications I know of that can change the anamorphic flag without re-encoding: QT Edit and Atom Inspector. If you have many clips to change, you should use QT Edit – which is a paid app that is part of the Pro Media Tools bundle from Digital Rebellion. It a has batch file system so you can make many useful changes many files at once without re-encoding.

Atom Inspector is an application from Apple that software developers use to examine and modify settings within QuickTime files.

To get this application, you need sign into Apple using an developer Apple ID. If you aren’t a developer, you can register for free first. Download the ‘Atom Inspector’ disk image from Apple

Before you get the hang of this method, it might be a good idea to work on a duplicate of your video clip in case you damage the file.

Use Atom Inspector to open your SD QuickTime file.

The Pixel Aspect Ratio values for the video part of the clip are what you need to change.

The video part of the clip (alongside audio and timecode) is usually stored in the first track. You can confirm that it is the video track because the entry below the track’s Media Information (minf) is ‘Video Media Header’: 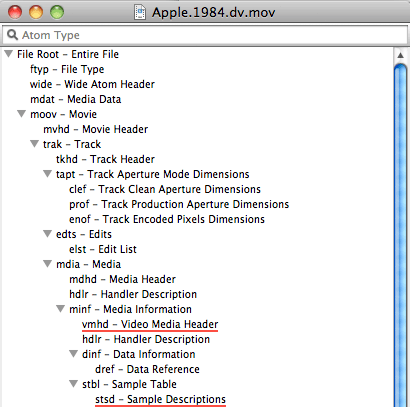 Click the Sample Descriptions – ‘stsd’ for the track. Look for the current values of Pixel Aspect Ratio – ‘pasp’ they should be ‘hspacing: 59, vspacing: 54’:

Once you have made your changes, save your movie. When you import it into Final Cut Pro X, the pixels will display as anamorphic.