In an event in September 2009 at USC, Stephen Susco talked to students about horror film development. 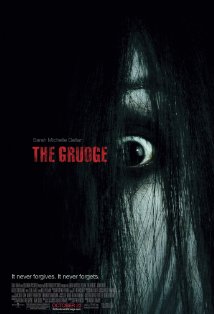 He says that he developed his version of The Grudge in parallel with Takashi Shimizu. Takashi had made a couple of shorter films for Japanese TV, so they decided to create their own feature versions seperately – one in Japan and one in the US. Stephen’s version was delayed, so when the time came for him to write the U.S. version, he had a few questions for Takashi (42 min):

‘”It’s great to meet you, so what was this?” and he would just be like “I don’t know. (beat) Does it matter?” In a way there’s so much genius in that, especially with horror. Look at the Shining. What does end of the movie mean? You don’t know. If you did it wouldn’t be scary. That kind of ambiguity is so essential to good horror movies
[…]
That’s what we’re lacking so often in that genre. I think it’s almost the only genre that is diametrically opposed to the way that studios develop movies. The development process is: “We need to understand everything.” You turn a script into a studio and you get 50 pages of notes and it’s all about clarity – having everything wrap up, so that when the movie is over people go “I got it, I got the whole thing.” Horror is about not doing that. Horror is about keeping people off-guard, unprepared and leaving with questions.”

He then talks about a development executive who points to The Sixth Sense as a perfect example of a script that has everything cleared up at the end.

He then goes on to tell a little more of his battles to keep The Grudge as ambiguous as possible. There’s a lot more available in the podcast of the event on iTunes (The episode dated ‘2 9 09’ here). The podcast is available as an mp3 at the bottom of the 2009-2010 podcast page at USC.