Over the last few years media companies have been scrambling to avoid what was seen as inevitable: that Apple would steamroll video content owners into giving up control over pricing their programming on the iTunes Store. Commercial TV and movie studios didn’t want to be caught napping like the music industry.

On both sides of the Atlantic an ‘anyone but Apple’ solution has become successful. In the US, NBC and News International launched Hulu: 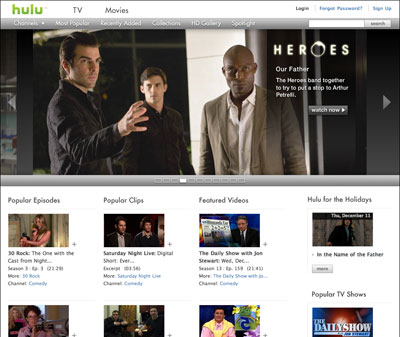 It is an advertising supported site for U.S.-based viewers to watch TV shows and films from Universal, Fox and NBC amongst others: 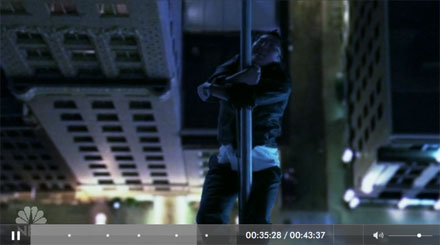 In the UK, the BBC has had great success with its iPlayer service. It is a catch-up service structured around the schedules of their TV and radio stations:

As the BBC is funded by the TV licence system in the UK, the service is free for British citizens.

The problem with the BBC getting large numbers of people to watch TV on their catch-up service has made things difficult for advertising-supported networks to get the same kind of figures. ITV, Channel Four, Five and Sky TV have their own services, but far fewer people use them. They have much less money to spend on their services.

The UK commercial networks are facing the same problems that TV stations all over the world are facing: more entertainment options available to their audiences and a reduction in spending by major advertisers. Some of the networks have been calling for a share in the money the government raises for the BBC.

Instead of sharing any of that reliable stream of cash, the BBC would rather maintain the future of UK Public Service Broadcasting by creating partnerships with other organisations. In a document published today, they state:

The BBC is today launching a series of new partnerships that could deliver more than £120 million per annum by 2014 to PSB beyond the BBC, including sharing the iPlayer with other broadcasters and bringing it to the television set.

The wide-ranging proposals cover the production, distribution and exploitation of content. One partnership—to develop a common industry approach to delivering on-demand and internet services to the television—is already being progressed by a group including BBC, ITV and BT.

Other proposals announced include helping support regional news beyond the BBC; BBC Worldwide working with other broadcasters to develop new revenue streams; and the BBC sharing technology and R&D to create a common digital production standard.

They plan to bring a standard user interface for catch-up TV to UK TVs that will be able to play content from any channel. This might include content from the huge archives of the media owners.

My second highlight shows that they suggest that their technology could be used to create an open-source digital production system for programme-makers. The PDF specifically says:

The BBC is exploring how it can adapt its own significant digital production investment to help create a common digital production standard for the sector: bringing together the UK’s creative industry and technology vendors with ‘software as a service’ that adheres to agreed industry standards, including:
• A digital archive tool: creating a shared repository for the industry allowing content to be more easily stored and accessed by producers and broadcasters in common
• A digital production tool: enabling new material to be combined with archive material and moulded roughly before craft edit begins, and which allows content development to be shared more easily by producers, editors and others.

If you are worried about the power Apple, Adobe, Avid or Microsoft may want to wield over the future of post-production, this might be good news.

In order to keep the licence-fee money, the BBC may be forced to act as an honest broker in the UK to make sure all applications will be able to interoperate using open standards. This will take the risk out of post production technology investments, make collaborative production simpler and cheaper and will open up the market to small production companies:

These services would not be constrained by geographical boundaries: a small independent producer working on a commission in Scotland could save money by paying to re-use rushes recently shot by a different production team in London rather than reshoot that material. Craft edit and graphics could be delivered via service providers on the platform with multiple remote online review points. Finally, the finished product could be delivered digitally in file form to the commissioning broadcaster, conforming to agreed standards and ready for cross-platform publication.

(from the detailed BBC document on partnerships)

Another step towards the day when all footage will be stored in the internet ‘cloud’ and creative people will be able to collaborate to make films no matter their location or financial resources.

Here are some links to PDFs of relevant BBC R&D:

PRISM (PeRvasive Infrastructure and Services for Media) is the BBC Research project for storing footage and programmes in the cloud.